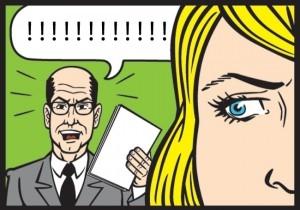 Jenny* called me on her drive home from work. She told me how her boss was not treating her well. He was humiliating her in front of other employees. Now the higher up boss was doing it too. She felt so embarrassed when they did this.

What made it even more infuriating was that she was filling in for 4 other people who had left the job. She was working really hard, really long hours trying to keep everything running in her department, but instead of being appreciated and thanked, she was being called out on every little mistake they were finding. She was exhausted, both mentally and emotionally.

When she first got this job, they had shown her a lot of respect. She had many years of experience in the industry and they were very happy she had joined their team. Now she felt intimidated daily by all their accusations and frustrated no one could see the good she was doing. She was angry, tired and feeling overwhelmed.

I listened and tried to empathize with her. I recognized a pattern – this was similar to the previous job she’d had. That boss had accused her and treated her badly as well. She justified his actions because she knew he had mental health issues and was on and off medication. This time there was no justification.

“You’ve got to deal with this in the unseen realm,” I told her.

“This is not normal. You’re right. What should I do?” She agreed.

“You need to take authority over this spirit of Intimidation so that it doesn’t harass you at work any more,” I said.

“But how can I? It’s my boss. I don’t have authority over him. I don’t want to be disrespectful of his position,” she replied.

“You’re right. You do want to respect his position. But you don’t deserve to be treated disrespectfully. That’s not right! I learned something that I believe will work for you. You cannot change his actions, but you can bind that spirit of Intimidation from manifesting in your presence. Then you’ll just be dealing with a normal human being – not one that is being influenced and empowered by an evil spirit,” I suggested.

She agreed to try it. I sent her some prayers to pray before work. I put them in an email so she could keep it easily accessible on her phone. Here’s the message I sent her:

Here are 3 specific prayers that will help you stand and take authority in your situation.

1. I come out of agreement with fear and intimidation. I release peace and trust in the Lord into my soul. (pause for a moment)
2. Spirit of Jenny, I call you to attention. Please come forward and lead. Soul, please go to the back and rest. (pause for a moment)
3. I take authority over Intimidation operating through (name of person). You do not have permission to manifest in my presence. I release the fear of the Lord, wisdom, humility and teamwork right now, in Jesus name! Thank you, Lord!

Save this email. When you cannot think straight, say these 3 prayers in this order.
Also say them before any time you know you will speak to your boss, supervisor, etc. Any person who is not treating you right – say this prayer before you talk to them. I would encourage you to say these prayers each day before work.

You WILL see this situation change – I promise!

The next morning I sent her a short text message reminding her – she said she got my message while driving to work and immediately pulled over so she could say those prayers.

At the end of the day, I got this message from her:

Many times the issues we have with people are not about the people themselves. It is an attack against us by demonic forces. They want to see if you know who you are – your identity in Christ.

For we do not wrestle against flesh and blood (human beings), but against principalities, against powers, against the rulers of the darkness of this age, against spiritual hosts of wickedness in the heavenly places.

Especially when you see the same pattern happening over and over in your life, it’s safe to assume there’s something spiritual going on. Ask the Lord for insight and understanding. Feel free to adapt these prayers to fit your own situation.

I hope this post will help someone today – it certainly helped Jennie! 🙂

Feel free to share below any specific prayers that you have found helpful so we can learn from each other. And if you try these 3 prayers – please let me know how it worked out for you. I expect you’ll see a shift in how people are treating you at your job too!

For more information about prayer #2, follow these links: Spirit vs Soul Part 1 and Part 2

What are your thoughts? Cancel reply