I want to tell you a story – it’s the story of a small brown dog. This story illustrates how following the Holy Spirit in the unseen realm can be quite an unexpected adventure! 🙂

I began to notice small dogs in my neighborhood. One day I walked out my front door and there was a woman I had never seen before. She was walking a Shih Tzu. I asked her about her dog – she told me she had rescued it and that she had two other small dogs at home. Then the neighbor down the street lost her Yorkie and came to my house to see if I had seen her dog. She was so worried! I helped her put up posters in the neighborhood and spread the word among the neighbors via text message. Thankfully, someone saw her dog and returned it to her. Crisis averted – all was well.

That summer my dog passed away – he was 14.5 years old. I missed him terribly – he was my fitness partner, always eager to get me up and walking around the neighborhood.

About 3 months later, I suddenly started getting the pictures of the small dog again. This time it was more insistent and I noticed a color – it was a small brown dog. I told my husband about it. We were getting ready to go out of town for the holidays (near Thanksgiving) so he suggested that if we were to get a dog, we should wait until after we got back. I sighed and patiently waited. I wasn’t sure why I kept getting these pictures, but I felt sure they were important and I should do something to respond.

Unfortunately, we both got sick and had to delay our trip. I was starting to feel anxious – I felt sure that there was a small brown dog that needed our help and we needed to find it. As soon as we returned, I started looking for a small brown dog on Petfinder.com. I also looked in the Lost and Found site for pets (a local service). Nothing felt right. We went to two pet adoption events at pet stores (hosted by rescue groups) – lots of nice doggies, but not the dog I sensed needed us.

Finally we decided to try the county shelter. I am very happy to report that all the small dogs were already adopted! What a relief! Yet the search continued.

I began to wonder if it was “just me”. Maybe I wanted a dog and this was just my crazy idea.

Then a friend called and said he needed prayer. He asked if he could meet with my husband and I. We agreed. He came over and while we were waiting on God, the presence of God filled the living room. It was very tangible. The Lord spoke to our friend and it was exactly what he needed to hear. My husband also received a word from the Lord for him – and it lined up with what the Lord had told our friend. While these two men were being “spiritual”, all I got was a larger, clearer picture of a small brown dog! Front and center – the image filled my mind. I took that as a sign that God really was behind this dog search and that He wanted us to find a specific dog who needed us.

The next day we went back to the shelter. Still no dogs that matched my vision. We came home and I laid down to rest. I felt an insistent nudge to go on Craigslist. I am not a fan of Craigslist – there’s a lot of shady things that go on there and you never know who you are dealing with (especially in Miami). But the nudge wouldn’t go away. I did a search and there was a post that caught my eye. I contacted the person by phone. 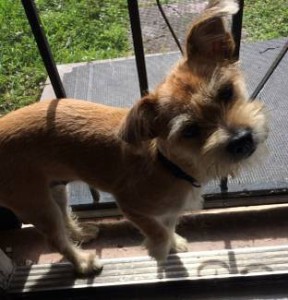 A woman named Zoey said a casual friend lost her apartment and asked her to keep the dog for a few weeks until she got a new place. She did it as a favor. Then after the friend moved, she didn’t want the dog back. Zoey kept calling; the woman did not answer. Finally she left several messages saying she was selling the dog. After a month of no response from the owner, she posted the dog on Craigslist. Three hours later, I saw the post.

We agreed to meet. The dog was adorable – small, brown and lively. Very loving and well-behaved. We paid her a small re-homing fee. We had found our dog! Both my husband and I KNEW this was the dog we had been searching for. 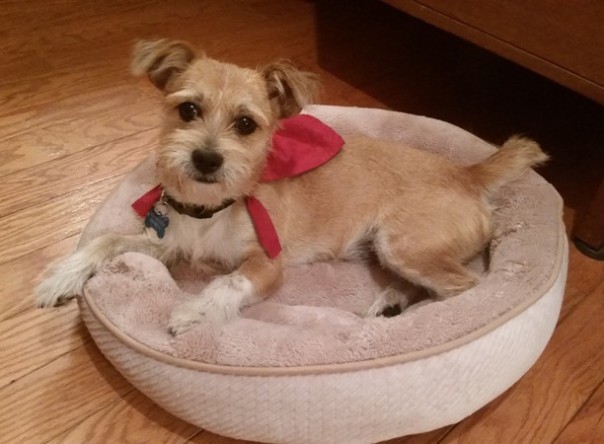 First day in her new home 🙂

It didn’t dawn on me until later – the timing factor. The insistent nudges I received that we needed to DO something were just about the same time that Zoey’s “friend” brought her the dog. However, we never would have found her at that time because she wasn’t in need of adoption yet. Then we got sick and our trip was delayed. After we returned, we went on several trips to shelters and adoption events. Finally, when I was ready to give up and began to think I was “crazy”, God sent me a confirmation that it really was HIM and not me. The next day, we found her through an unconventional path – something I never would have thought of to begin with. If we hadn’t gone through all those unsuccessful attempts to find the dog, I probably would have dismissed the idea of searching on Craigslist.

The Lord knows our thoughts and our path. He knows how to direct our steps even when they are not what we would normally do. He’s amazing, isn’t He? I love the adventure. We had so little to go on – a faint vision, an insistent nudge and a feeling that there was something we were supposed to do. A small brown dog needed to be rescued and the Lord cared enough to order our steps so we would find her. I am so glad He did! ❤